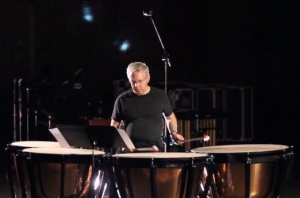 Three Movements for Timpani was commissioned by Emily Tannert in 2010. The work is a attempt to create an innovative timpani solo. It was premiered at the Round Top Percussion Festival in 2012. Over the years I've performed it in many recitals and clinics. After numerous requests  I decided to put it up on my site. Hope you enjoy it!  Click to Purchase

Movement I is written with a contrapuntal texture, incorporating the use of double-headed mallets and written with two staffs. Each mallet has a soft side and a hard side. A slow rubato melody is played in the top staff with the hard side of the mallet over a bass line in the bottom staff with the soft side. The work begins with a five-note theme (B-C#-G-B-C#-F) ending on long tone produced by a Superball dragged across the timpani head. Throughout the movement the five-note theme is treated as a tone row: the melody must always use these notes in order. The work slowly builds to a flurry of notes with a transition of harmony to open 5ths, and slowly decrescendos.


Movement II pays homage to the style of Steve Reich, specifically his groundbreaking technique of phasing. Here one player phases with himself. The piece opens with the three bottom drums tuned in unison. The right hand begins with a slow pulsing eighth note figure; the left crescendos against this producing a two against three rhythm. The hands then move to play the figure on three drums, producing a hypnotic effect. The movement continues with a series of crescendos and diminuendos: with each crescendo the player morphs into three against four, accenting every three notes of the four-note pattern as well as detuning one or more drums; with every diminuendo the player accents every two notes of the three-note pattern and retunes the drums back to unison. Using this pulse a metric modulation occurs, changing to two against three, and the whole process begins again. With each pass the tempo increases. Towards the end of the work the process is reversed, returning the piece back to its original tempo.


Movement III utilizes the technique of metric modulation. The movement opens with the low pitch drone of the Superball followed by an African-style pattern in 5/4. Within the pattern the left hand plays in the center of the head on every half note, producing a surdo pulse that flips the main beat over every other measure. Within the first couple of measures a simple three-note rhythm fades in and out; this motif is constantly restated throughout the work in different variations. The opening African rhythm modulates into a slow quarter-note bass line. Figures fade in and out, eventually turning into a faster eighth-note pulse and climaxing to a virtuosic sixteenth-note figure. Every seventh sixteenth is accented which becomes the new pulse, returning to the original tempo with the African rhythm. The movement ends with a series of metric modulations using the simple motif that was stated in the beginning. As the last rhythm fades the Superball ends the movement.